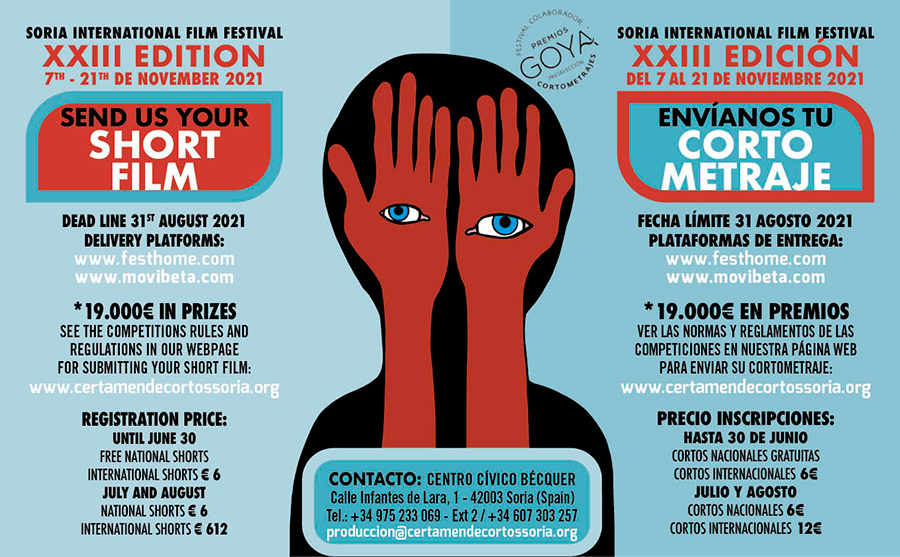 Since the Soria Short Film Fest (SOIFF) considers at all times Short Films CINEMA in capital and appreciates as essential culture dissemination, our purpose is to promote as mean of audiovisual expression; the contribution to acknowledgment and dissemination. This format must be essentially and basically a part of CINEMA.

-This festival is open to Filmmakers from the entire world.

- Any filming system is permitted as well as genre: Fiction, Animation or Documentary.

-Running time will be no longer than 30 minutes; credits included.

-Shorts films production must have ended their production not before January 1st, 2020.

-Every Short must be subtitled to English language; including those which original version is Spanish.

-Selection of Shorts will be in charge of the Organizing Committee and announced in our Website on September 30th, 2021.

-Selected Shorts will be screened in any of their sections in contest or in the festival parallel section. This festival must communicate to all participants in which section is their Short to be screened.

-Participating Shorts must not have been screened at any exhibition, festival inside the province of Soria.

-For promoting Shorts and Festival, the Organizing Committee will use for no more than 1minute movie clips from selected Shorts.

-All Short screenings will be in digital format regardless their filming system.

-The Organizing Committee will put in contact with all selected films in order to request the sending of projection file.

-The Official Jury will consist of Cinema, Culture and Communication Professionals and in charge of giving the awards. Their resolution is conclusive.

-Shorts will compete for different prizes awarded by different juries: Official Jury, Jury "Mediterranean Diet", Young Jury, Elderly Jury, Jury "Behind the scenes", Jury Ángel Mayor (composed of the Selection Committee), Jury "One of Ours", Children Jury and Audience Jury. All awards will be known in the awards Ceremony.

-Concerning selected Shorts, the Organizing Committee will cover costs in accommodation (3 nights for domestic and 4 nights for foreign production), and food to only Director and 1 person from their work-team.

-It is hereby remained the creator´s permission or right owners to screen selected Shorts during Festival Contest. No privity of contract neither with Ayuntamiento de Soria (City Council of Soria) neither management company related to principal or authorship.

-The short films screened at the festival may assign all rights in order participation in the Cine a los Cuatro Vientos. Previous Contact. A project is carried out in different places of our country and in collaboration with other national and international festivals for promotional purposes and with the main objective of creating new audiences around the short film.

-To be submitted to Festival involves express acceptance of this rules.

The attendance shorts in the competition section will compete to the following awards according to their nature:

This award is given by the audience who attend the screenings. Computation will be calculated by adding votes of audience and making the percent of attendance.

AWARD "ONE OF OURS"

*Award "One of ours"

This award will be given by the Short´s Representatives in Festival. Only represented Shorts will enter in Contest.

AWARD "CITY OF SORIA"" Awarded by the festival programmers.

​Prize awarded by a jury composed of people close to the labor problema. One of the dhort Films that participate in the "En precario" Sessions is awarded. This sesiónincludes Works related to the world of work

Prize awarded by a jury composed of members of the Association Memry and Dignity that fight for the total recovery of Historical Memory. One of the short films that participate in the "Memory Short" sessions isrewarded. This sesión included Works related to historical memory and itd recovery

Weekend in Soria Whit accomodation and meals in the best Soria restaurants for four people.

Prize awarded by a jury made up of representatives of collaborating restaurants or establishments. This sessions collects works related to restoration and food.

"The corresponding taxes will be deducted from all the prizes"

FOR ANY REQUESTS PLEASE DO NOT HESITATE TO CONTACT US
INFORMATION-SENDING ADDRESS:

Error: No articles to display